Stepantsminda (Georgian: სტეფანწმინდა; formerly Kazbegi, ყაზბეგი), is a small town in the Mtskheta-Mtianeti region of north-eastern Georgia. Historically and ethnographically, the town is part of the Khevii province. It is the center of the Kazbegi Municipality.

Stepantsminda was named after a Georgian Orthodox monk named Stephan, who constructed a hermitage at this location on what later became the Georgian Military Road.

The town is dominated by large mountains on all sides. The most notable mountain of the region, Mount Kazbek, lies immediately to the west of town.

The second most prominent peak, Mt. Shani, rises to an elevation of 4,451 meters (14,600 feet) above sea level, 9 kilometers to the east of Stepantsminda. The town is located 10 kilometers to the south of the famous Darial Gorge.

It came under the control of a local feudal magnate, the Chopikashvili clan, who were in charge of collecting tolls on travelers in the area in the late 18th century. After the expansion of the Russian Empire into the Kingdom of Georgia in the early 19th century, the people of the region revolted against Russian rule. However, the local lord Gabriel Chopikashvili, son of Kazi-Beg, remained steadfast in his loyalty to Russia and helped to suppress the revolt. In return, he was promoted to officer in the Russian Army.

He adopted the surname Kazbegi, and the village under his control was also frequently referred to as “Kazbegi”. The name was officially changed to Kazbegi already under the Soviet rule in 1925. Gabriel Chopikashvili-Kazbegi’s grandson was the famed Georgian writer Alexander Kazbegi, who was born in this town. In 2006, the town reverted to its original name of Stepantsiminda 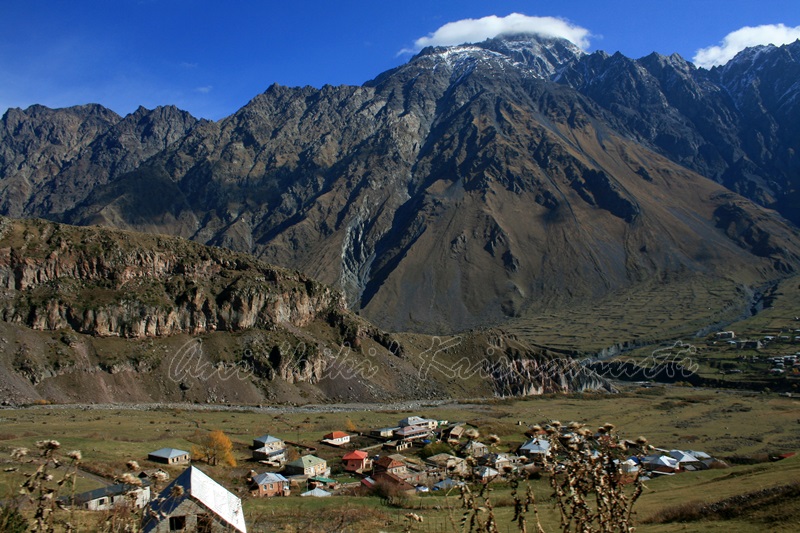 Stepantsiminda is known for its scenic location in the Greater Caucasus mountains, and is a center for trekkers and mountain climbing.

Local attractions include the Kazbegi Museum and Ethnographic Museum in town, and the Gergeti Trinity Church outside of town, as well as Mount Kazbegi itself and the alpine meadows and forests of the surrounding Kazbegi Nature Reserve.

Gergeti Trinity Church (Georgian: წმინდა სამება – Tsminda Sameba) is a popular name for Holy Trinity Church near the village of Gergeti in the Georgia. The church is situated on the right bank of the river Chkheri (the left tributary of the river Terek), at an elevation of 2170 meters, under Mount Kazbegi.

The Gergeti Trinity Church was built in the 14th century, and is the only cross-cupola church in Khevi province. The separate belltower dates from the same period as the church itself. Its isolated location on top of a steep mountain surrounded by the vastness of nature has made it a symbol for Georgia.

The 18th century Georgian author Vakhushti Batonishvili wrote that in times of danger, precious relics from Mtskheta, including Saint Nino’s Cross were brought here for safekeeping. During the Soviet era, all religious services were prohibited, but the church remained a popular tourist destination. The church is now an active establishment of the Georgian Orthodox and Apostolic Church 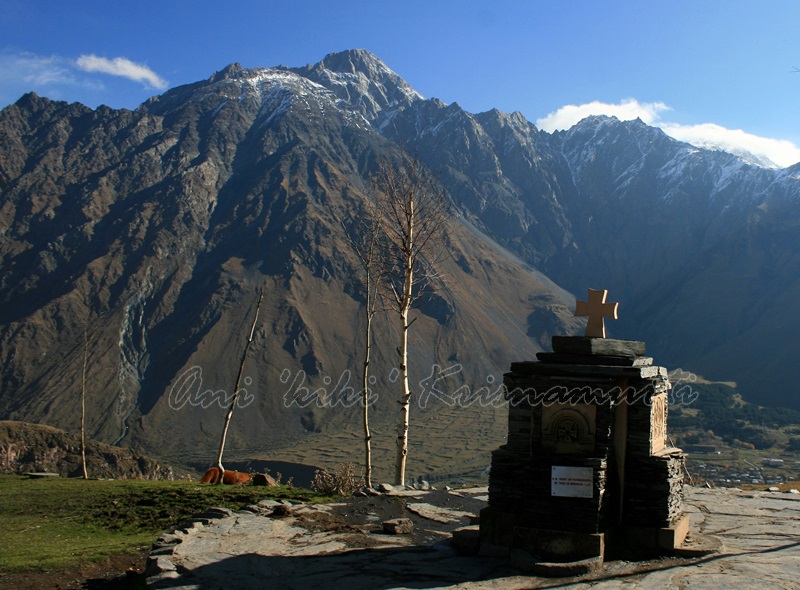 The church is a popular waypoint for trekkers in the area, and can be reached by a steep 3 hour climb up the mountain, or around 30 minutes by jeep up a rough mountain trail.