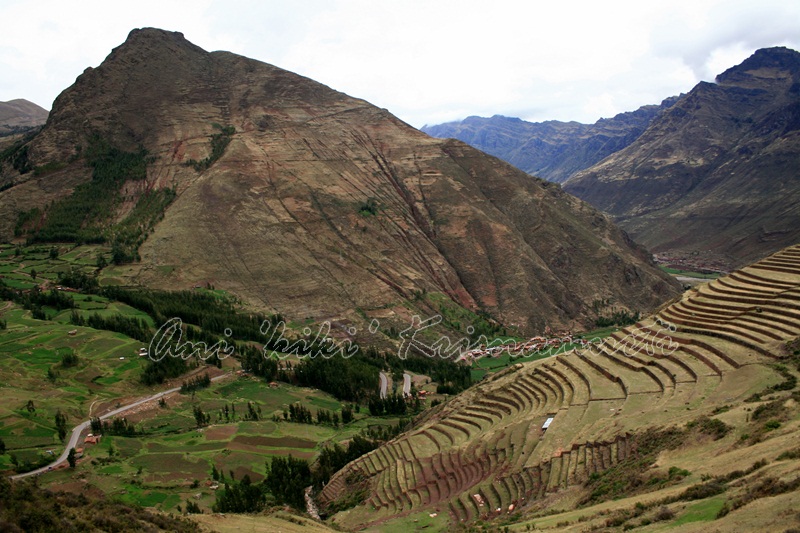 The Sacred Valley of the Incas or the Urubamba Valley is a valley in the Andes of Peru, close to the Inca capital of Cusco and the ancient city of Machu Picchu. It is located in the present-day Peruvian region of Cusco. In colonial documents it is referred to as the “Valley of Yucay.”

According to recent researches it encompasses the heartland of the Inca Empire. The valley is generally understood to include everything between Calca and Lamay, Písac, and Ollantaytambo.

The valley was formed by the Urubamba River, also known as Willkanuta River (Aymara, “house of the sun”) or Willkamayu (Quechua).

The latter, in Quechua, the still spoken lingua franca of the Inca Empire, means the sacred river. It is fed by numerous rivers which descend through adjoining valleys and gorges, and contains numerous archaeological remains and villages. The valley was appreciated by the Incas due to its special geographical and climatic qualities. 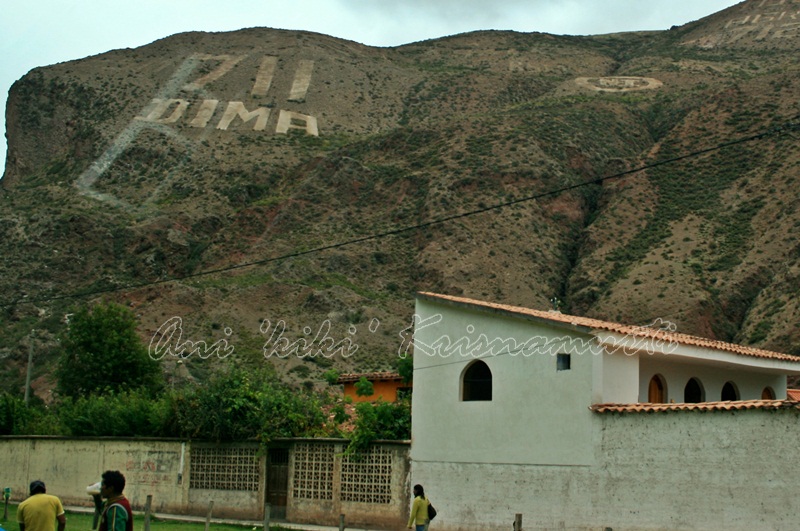 It was one of the empire’s main points for the extraction of natural wealth, and one of the most important areas for maize production in Peru northwards from Pisac.

The early Incas may have come from Wimpillay, as their mummies had been discovered there. Large scale maize production started around 1400 as Inca urban agriculture based on varieties bred in Moray, either a governmental crop lab or a seedling nursery of the Incas.

Yucay is a town in Southern Peru, capital of the district Yucay in the province Urubamba in the region Cusco 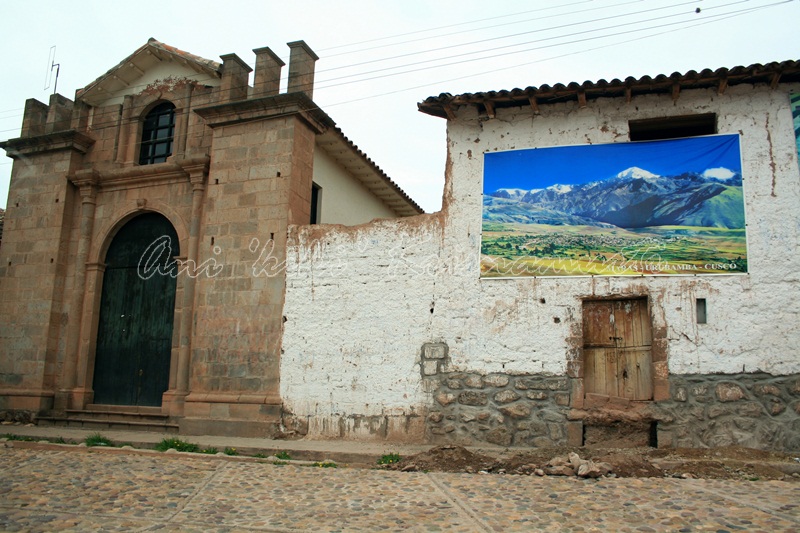 Maras is a town in the Sacred Valley of the Incas, 40 kilometers north of Cuzco

Moray or Muray (Quechua) is an archaeological site in Peru approximately 50 km (31 mi) northwest of Cuzco on a high plateau at about 3,500 m (11,500 ft) and just west of the village of Maras.The site contains unusual Inca ruins, mostly consisting of several enormous terraced circular depressions, the largest of which is approximately 30 m (98 ft) deep. As with many other Inca sites, it also has a sophisticated irrigation system.

The purpose of these depressions is uncertain, but their depth, design, and orientation with respect to wind and sun creates a temperature difference of as much as 15 °C (27 °F) between the top and the bottom. It is possible that this large temperature difference was used by the Inca to study the effects of different climatic conditions on crops

Písac, Pisac, or P’isaq (Quechua) is a Peruvian village in the Sacred Valley on the Urubamba River.

The village is well known for its market every Sunday, Tuesday, and Thursday, an event which attracts heavy tourist traffic from nearby Cusco

The Inca constructed agricultural terraces on the steep hillside, which are still in use today. They created the terraces by hauling richer topsoil by hand from the lower lands. 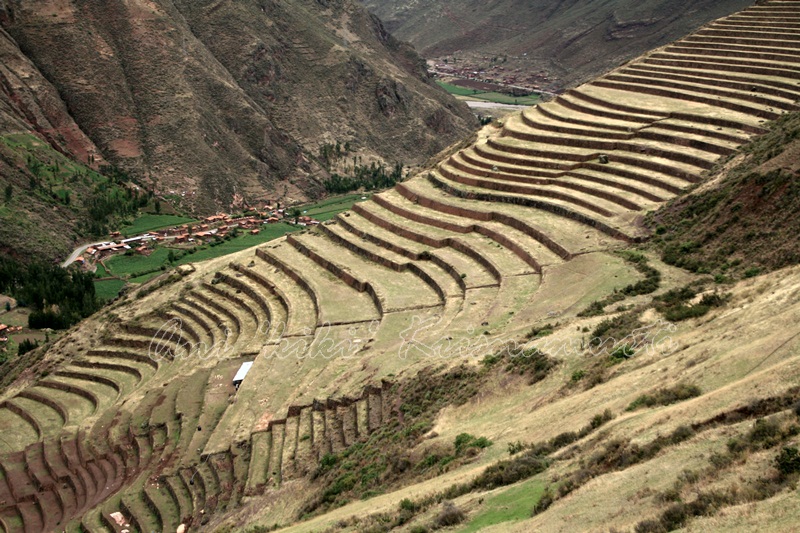 The terraces enabled the production of surplus food, more than would normally be possible at altitudes as high as 11,000 feet.The narrow rows of terraces beneath the citadel are thought to represent the wing of a partridge (pisaca), from which the village and ruins get their name. 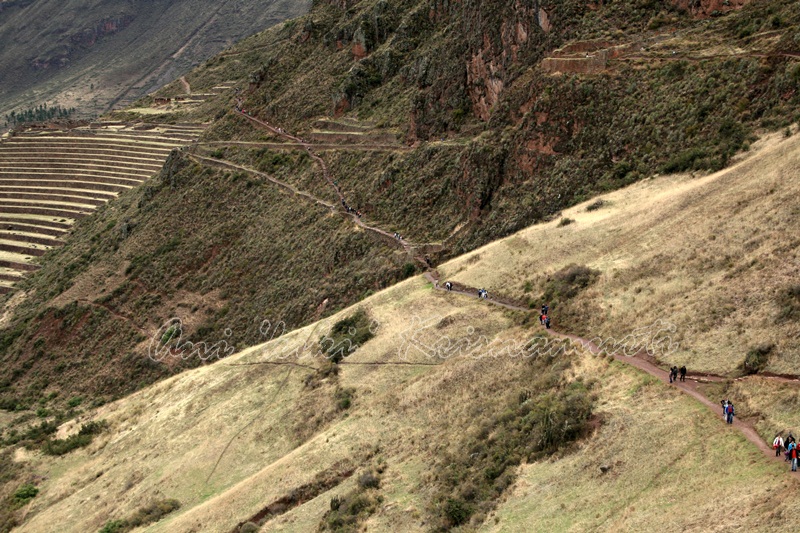 Modern Pisac is a picturesque Andean Village, typical except for the huge, spreading pisonary tree that dominates the central square. The village is best known for its Sunday market, which draws hundreds of tourists each week.

In spite of its popularity the market retains much of its local charm, at least in the part where villagers from miles around gather to barter and sell their produce. 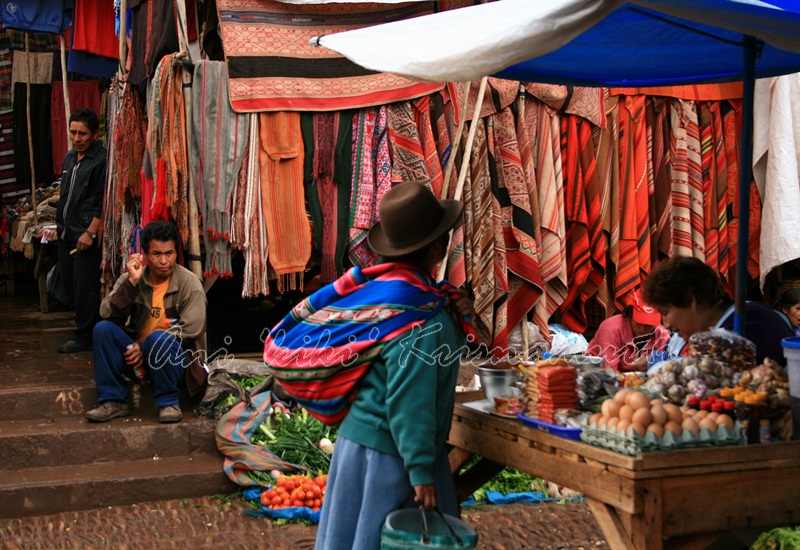